Multidisciplinary drifting Observatory for the Study of Arctic Climate

It is one of the largest scientific expeditions in recent years: in September 2019, the German research icebreaker Polarstern will set sail from Tromsø, Norway, to spend a year drifting through the Arctic Ocean – trapped in ice. The goal of the MOSAiC expedition is to take the closest look ever at the Arctic as the epicenter of global warming and to gain fundamental insights that are key to a better understanding of global climate change.

Hundreds of researchers from 19 countries take part in this exceptional endeavour. Following in the footsteps of Fridtjof Nansen’s ground-breaking expedition with his wooden sailing ship Fram in 1893-1896, the MOSAiC expedition will bring a modern research icebreaker close to the north pole for the first time in polar winter. The data gathered will be used by scientists around the globe to take climate and ecosystem research to a completely new level. 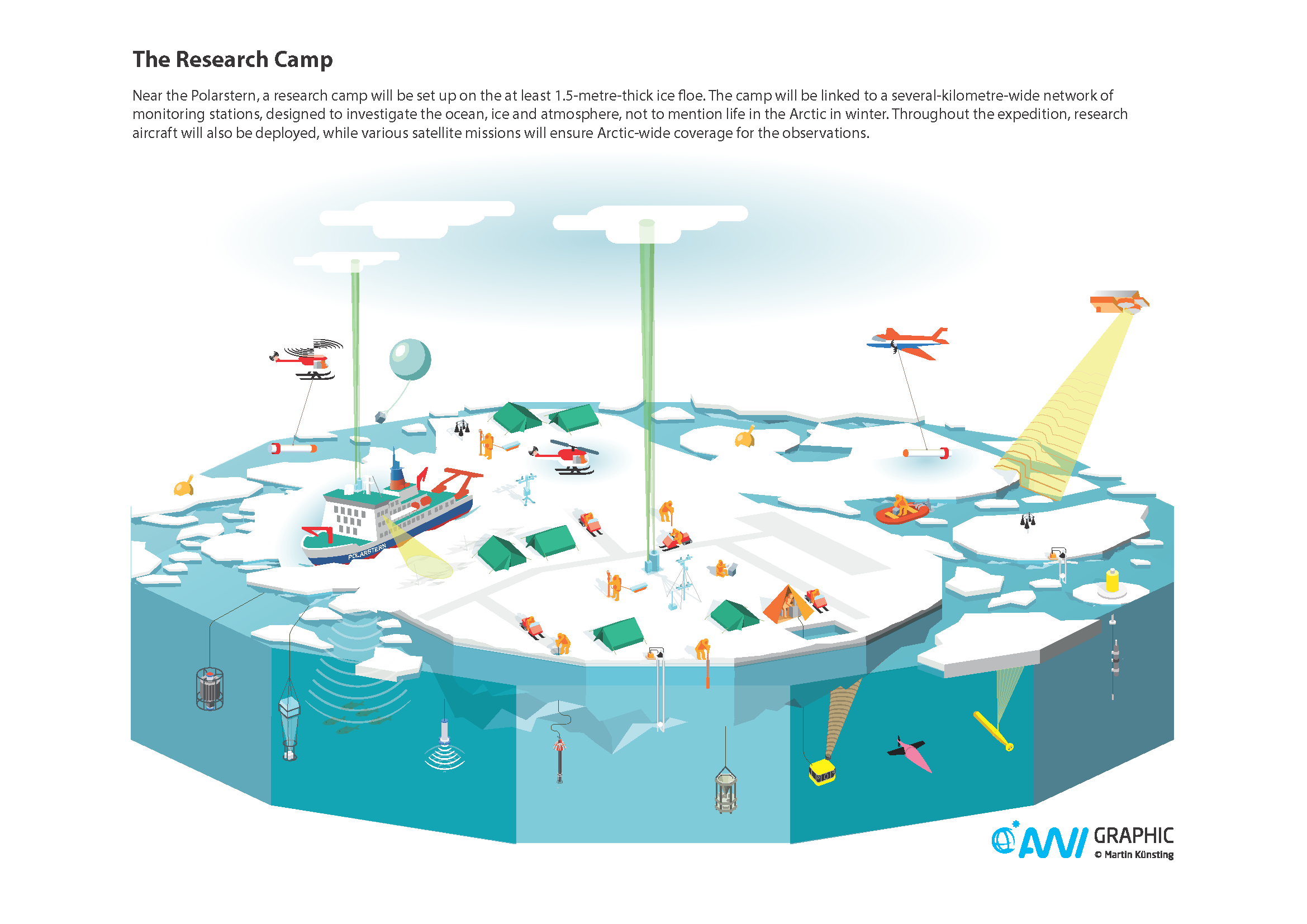 Led by atmospheric scientist Markus Rex, and co-led by Klaus Dethloff and Matthew Shupe, MOSAiC is spearheaded by the Alfred Wegener Institute, Helmholtz Centre for Polar and Marine Research (AWI).

Swiss teams, co-funded by the Swiss Polar Institute, will be on board of the Polarstern in order to conduct some exciting research. Dr. Julia Schmale (Paul Scherrer Institute) and Dr. Martin Schneebeli (WSL) will act as the PIs for the two projects described below. 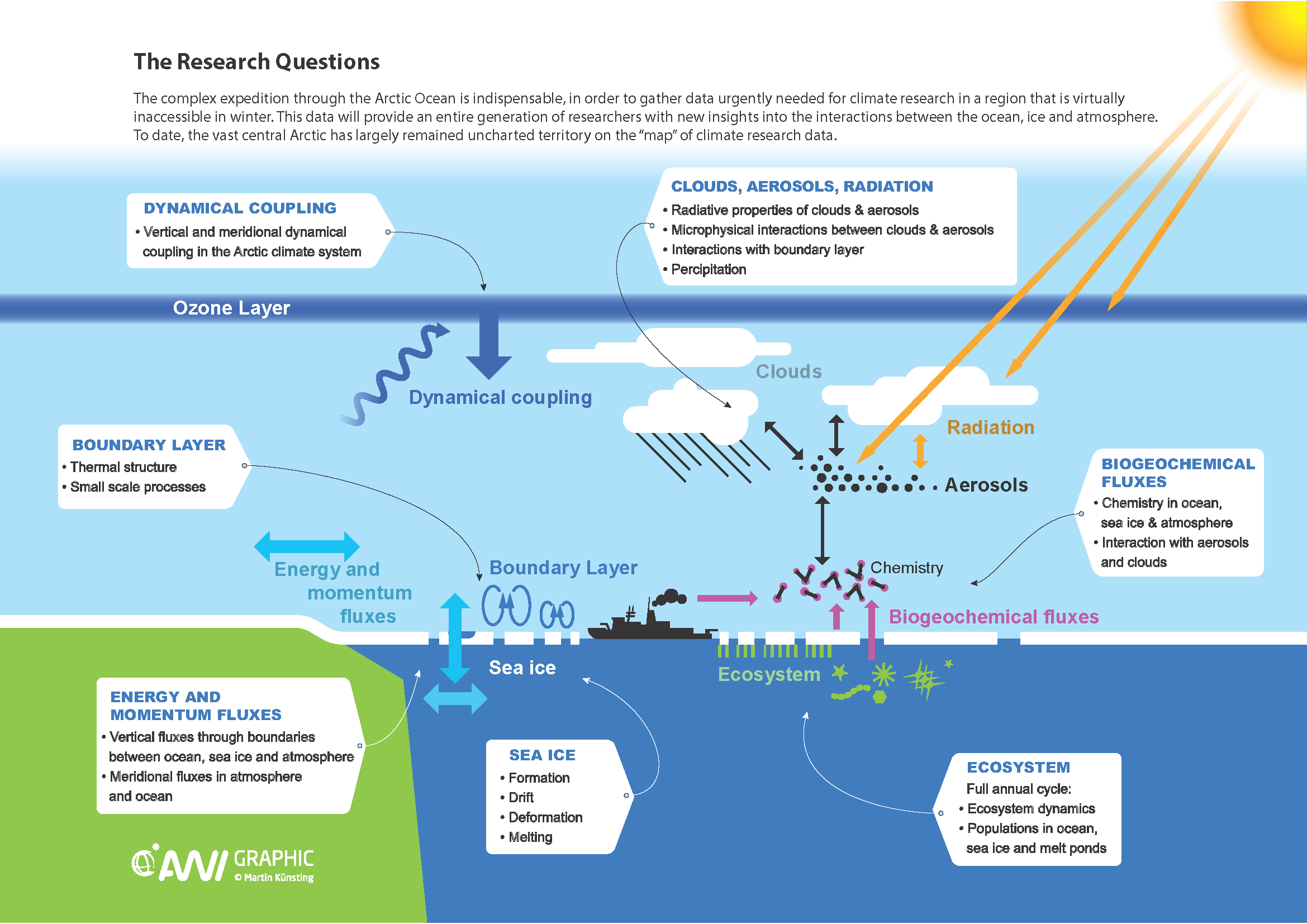 The Arctic plays a crucial role for Earth’s global climate and energy balance. At the same time, Arctic ecosystems are disproportionally affected by the impact of the climate change. In order to gain a better understanding of this important and vulnerable region, research must focus on increasing sample and data acquisition in the field to gain process level understanding of Arctic change.

The Arctic is warming more than twice as fast as the global average, a phenomenon called Arctic amplification. The consequences are manifold and include the disappearance of the summer sea ice, changed weather patterns over Europe, and growing economic activities in the Arctic.

The specific reasons for the Arctic amplification still remain unclear even though is it known that they are closely linked to the interplay between the changing atmosphere (air) and cryosphere (snow and ice).

Clouds are a critical element for the energy transfer between the atmosphere and the surface. They can cool the surface by blocking sunlight, but they can also warm the surface by reflecting the warm, infrared radiation of Earth. Opposed to most other regions on Earth, clouds in the Arctic tend to have a warming effect. In order to form, clouds require small particles in the air, aerosols, that function as seeds for cloud droplets and ice crystals. However, to date we know very little about the sources and abundance of these cloud seeds, particularly during polar night, because such measurements were simply not possible before MOSAiC.

The MBRACE project aims to find out (a) which are the natural processes that produce particles, e.g. phytoplankton blooms or sea ice movement, that influence clouds, and (b) which are the human-made sources such as air pollution transported over long distances to the central Arctic Ocean. The project will also try investigate how the changing Arctic environment, e.g. diminishing sea ice or blooming algae under thin sea ice, will change the aerosol population and with that future Arctic clouds. For that purpose, we deploy more than a dozen state-of-the-art instruments in the Swiss aerosol container which measure particles and trace gases in real time.

Together with observations from other MOSAiC projects which are closely related, such as SnowMOSAiC, our data will help to improve atmospheric and climate models for better predictions of the Arctic future and weather patterns over Europe.

The MOSAiC expedition, which enables continuous measurements and sample collection in the Arctic Ocean throughout a full year, represents an unprecedented opportunity to measure the ocean – ice – snow – atmosphere interaction. A key factor of these processes is the snow covering the sea ice and its properties. The SnowMOSAiC project investigates these complex interactions with high-tech instrumentation.

SnowMOSAiC studies the spatial thickness and its changes over time using terrestrial laser scanning, the microwave properties using a special radiometer, and its microstructure using the SnowMicroPen and computed micro-tomography. These unique measurements will lead to a dataset of unprecedented precision and size, opening new opportunities to improve models.

As for the MBRACE project, the data collected by the Swiss team will be used in conjunction with data collected by other projects participating in the MOSAiC expedition. This interdisciplinary approach will lead to an improved understanding of the sea ice in the Arctic.

You can follow the  MOSAiC expedition live on Twitter (@MOSAiCArctic) and on Instagram (@mosaic_expedition) using the hashtags #MOSAiCexpedition, #Arctic and #icedrift. The presentation of the Swiss projects on MOSAiC is also available in German and French (see the PDF documents below).